Why Wouldn’t I Want the Doctor’s Office to Bill The At Fault Insurance Instead of My Health Insurance?

Below is a transcript of the podcast 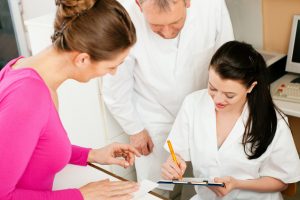 This is Ann Margaret Perkins with Perkins Law Firm and I’d like to welcome you to our podcast today. We’re going to be talking about why you would not want the doctor’s office to bill the at fault insurance instead of your health insurance or your med pay.

I totally understand the reaction people have when I tell them they need to be filing their bills with their health insurer or their med pay because they say, “Well it wasn’t my fault. Why is my insurance having to be involved?” The short answer to that is because your medical bills are your responsibility. If you don’t have health insurance or med pay that’s going to be paying those, then you’re going to be waiting for your settlement to pay them. And there are big downsides to that which I have addressed in another podcast. But sometimes people simply don’t have health insurance or med pay and it’s possible to have to get medical treatment and hopefully not end up in a big hole, as a result. Even if you don’t have health insurance or med pay, you can sometimes talk with doctors or hospitals and work out a payment plan with them where they’ll treat you and you can just pay a little bit along. They may accept a lien, where they’re paid at the end of the case. Now hospitals typically will not do that but there are some doctors who do. If you have an attorney in Georgia it is ethically permissible for your attorney to pay for diagnostics. Hospitals frequently will say “We’ll bill the at fault party which sounds great but they do not do it to help you. They really are doing it as a way to get the liability insurance so that they can then file a hospital lien and them filling the hospital lien does not benefit you. It costs you significantly. It can make your case much more difficult to resolve. And if you’re contemplating giving the hospital the liability insurance information so that they can file a lien, I would encourage you to read my blog on liability insurance and hospital liens before you do that so that you don’t make what I think is a big mistake. It’s in your best interest to have your treatment covered by your health insurance or med pay and the reason is this. One, it gets you in to see the medical providers quickly. You have some resource that’s going to be paying while you go, you’re not going to have try to find somebody who’s going to take a lien or set up a payment plan and end up in a pickle financially. Even if you have to repay the health insurer or the med pay carrier some of what they paid, torture medical expenses when you settle your case, sometimes that’s what happens. But even if you have to do that you’re going to come out better reimbursing them some portion of what they paid rather than paying 100 percent of the bill from the provider. If you have health insurance or med pay and the provider says “Oh we can’t bill them, we have to bill the liability carrier.” That’s just not true. We occasionally have clients who call us and say, “That’s what they told me” and we are able to make a phone call to that provider pretty quickly and straighten that out because that’s not accurate.

If you don’t have health insurance you’ve got an option now that you didn’t use to have. And that is you can get health insurance after an injury and it will have to pay for that pre-existing condition. That didn’t use to be the case. Now I’ll give you an example where that came in and was very important to a client of mine getting medical treatment. He was T-boned in a serious automobile collision and he had something called cervical myelopathy, he actually had a disc in his neck that was pressing on his spinal cord and it was making his arms not work. He was able to get in himself, he didn’t have health insurance or med pay and he was able to get in to see the orthopedic doctor on a self-pay basis. We were able to get an MRI performed on him and we were able to pay for that as it was diagnostic. The orthopedic surgeon, I went to talk with him about my client’s injuries and he said he desperately needs neck surgery. His condition is going to get worse and he’s going to lose the use of his arms. And I said, well you know he doesn’t have any health insurance, but let me see if when open enrollment comes up if we can get him some. And if so, then he can get back in and have the surgery. He signed up for health insurance when enrollment was open and that health insurance paid for his neck surgery, just a few months later.

So that open enrollment period under the Affordable Care Act is typically November 1 through January 31 of the following year. So for this year, it would have been November 1, 2017 through January 31, 2018. But there are some special exceptions where you might be able to get enrolled even outside that period and it’s certainly worth looking into. You can go to healthcare.gov and look at those exceptions and whether you qualify for those. Having the ability to get insurance after an injury and still have to cover those injuries is a real benefit that we didn’t use to have. Now it means frequently people can get treatment that they couldn’t have before and they’re not going to be burdened with those bills on the front end like they would have prior to being able to get that health insurance. So I hope that today’s podcast has been helpful to you if we can assist you in any way in a personal injury or wrongful death claim, we’re happy to do that. Just give us a call at 770-834-2083. Or go to a web site injuryispersonal.com and read our blogs, you may get some information there. But if you have any questions and you want to talk to us, we’re certainly happy to talk to you. Thanks a lot!

In my opinion, Perkins Law Firm is the best. They are sincere and caring. If they say they will return your call, they do. I am so grateful I chose them and they accepted me as a client.