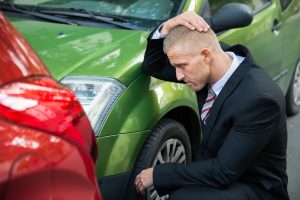 This is Ann-Margaret Perkins with Perkins Law Firm, and today I’m going to be talking about whose fault is an accident if you get rear-ended? I’m going to start by telling you about a lesson I learned as a young lawyer 25 years ago when I was talking to an older more experienced lawyer. I had a case that I thought was just an absolute certainty in terms of winning and was telling this lawyer about it. I said you know this is a slam dunk. And he said, “Ann-Margaret, no case that is a slam dunk.” And I said, “Well what about a rear-end collision?” And he said, “No. Not even that.” At the time I thought, well how can a rear-end collision not be the fault of the person who hit you in the rear-end?

There’s no law that says that if one car rear-ends another that vehicle is at fault. What the law requires is that you follow another vehicle at a safe distance, considering all the circumstances. And the law also requires that you keep a proper lookout ahead of you. So you might say if a person’s keeping a proper lookout and following at a safe distance, there’s no reason they should ever rear-end another person unless it’s the following car’s fault.

I want to share with you a couple things I’ve run into in actual cases over the years. One that I’ve seen many times is a following driver says that there were no brake lights on the car that they rear-ended. Another that I’ve seen more recently is a case where my clients were coming off of an interstate merging onto the road and the person who hit them in the rear claimed that there was a sign at the intersection that instructed my clients to keep moving instead of yielding to traffic on their road. If a person really doesn’t have functional brake lights that can be a reason that a person rear-ending them is not at fault. If there is really a sign that says, “Keep Moving” at the intersection and a person doesn’t, that could be a reason that the person who rear-ends them is not at fault. So creative at-fault parties, adjusters, or attorneys can often find ways to argue that even a rear-end collision is not their fault.

What can you do to protect yourself? Document the evidence. In all the cases we handle, one of the first things we do is we get a statement from the other driver. If they say there were no brake lights on our client’s car in a rear-end collision, we’re going to talk with the police officers as well and see if the driver who hit our client said anything about that at the scene. We’re going to go look at our client’s car and test the brake lights and see if they function. We’re going to talk to witnesses who were listed on the police report and see what they have to say about whether the other party said anything at the scene about my client’s brake lights not working. Did they hear the other party say anything at the scene about why the wreck happened? Maybe they said something different at the scene than they said after they left and thought about it and came up with the idea of there being no brake lights. We’ll get the police officers’ audio and video and listen to what the other driver said. And we’ll look at the scene itself to see if there’s any evidence. For instance, in a case where someone says there’s a “Keep moving” sign, is there, in fact, a “Keep moving” sign there? Is there any other evidence at the scene that supports or contradicts the claim made by the person that rear-ended our client? In a circumstance like this, you can’t stop somebody from saying whatever they want to say about how a wreck happened. But what you can do is gather evidence necessary to prove that they’re not being honest and that the wreck was, in fact, their fault.

Thankfully, many times someone who rear-ends another person will admit that it’s their fault and there’s no disagreement about that issue. But you never know if there’s going to be a disagreement about it, and that’s why it’s most important to do what you have to do to protect yourself and your claim. I hope you found this to be helpful. If you have any other questions about this topic or any others to do with personal injury or wrongful death, I’m happy to talk with you. My number 770-834-2083. Or you can check out our website injuryispersonal.com. Thanks for listening.

How Medicaid, Medicare, or Social Security Benefits May Be Affected By A Person’s Personal Injury Claim

I wanted to thank each and every one of you for making me feel comfortable as I was in the dark about everything.