When Does Uninsured or Underinsured Motorist (UM) Insurance Matter?

The short answer is a lot more often than you might think.  You probably know if you get injured in a car wreck and the person that hit you does not have any liability insurance, your UM coverage applies.  But that example is just the beginning.  Here are a few examples of other times UM coverage could be helpful in making sure you are fully compensated for your injuries.

A more complicated example of how UM works

But your claim is worth $50,000, so where can you recover the rest?  If you look back at the example I provided above, you’d go to your resident relatives’ UM coverage and then my UM coverage.If you have 25/50 in add-on UM (that is UM that adds onto the liability insurance) you could recover $25,000 from your UM instead of $12,500.

But you are still short $12,500 of the value of your claim.  Like in the example I gave earlier, you could go to your resident relatives’ UM and then mine to try to recover the $12,500 you are short.

What if my insurance company tells me I do not have UM coverage?

If you just take their word for it you may cost yourself $25,000.  Georgia law does allow you to choose traditional/offset UM, but the insurance company must prove you chose traditional/offset instead of add-on.  If they can’t produce proof, you have add-on UM coverage.  So what difference does add-on coverage make in the example in this paragraph?  With add-on UM, your UM insurance carrier would have to pay you the other $25,000 of your claim.

Stacking UM coverage may sound crazy, but under Georgia law, you get to do just that.  First, it is important to understand that what I discuss in this blog only applies to traditional/offset UM insurance.  It does not apply to add-on UM.

One of the first things we do when we are hired by a new client is determine all of their possible UM coverage.  Once we have put all of those UM carriers on notice and received confirmation of the amount of the UM coverage, the next thing we do is stack it.  What does that mean?

How much UM do you have and how much does it pay?  Without stacking, it would look like this chart. 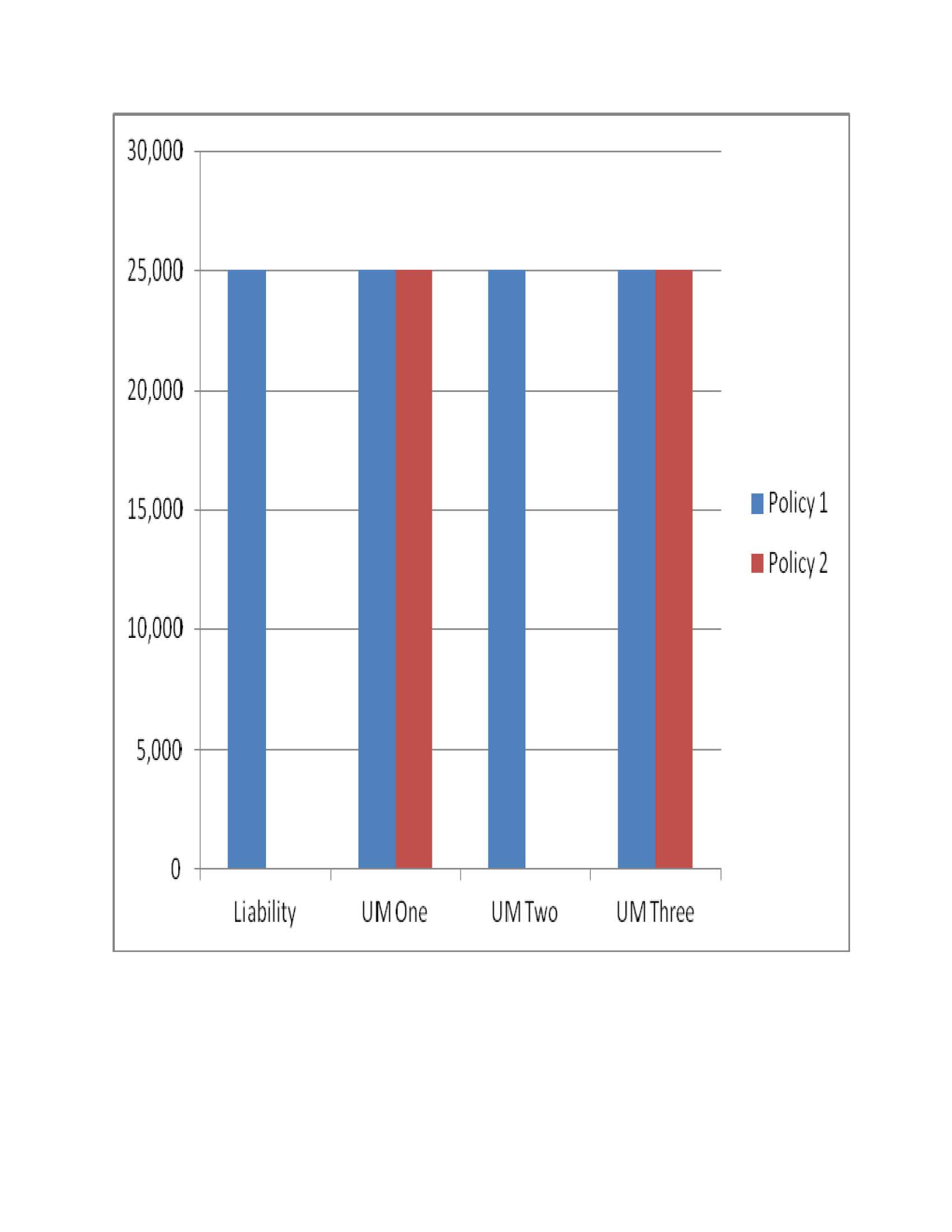 The UM coverage would equal the liability coverage so the at-fault party would not be “underinsured” and you’d have no UM claim.
This chart shows what that same traditional/offset UM coverage looks like when you stack it. 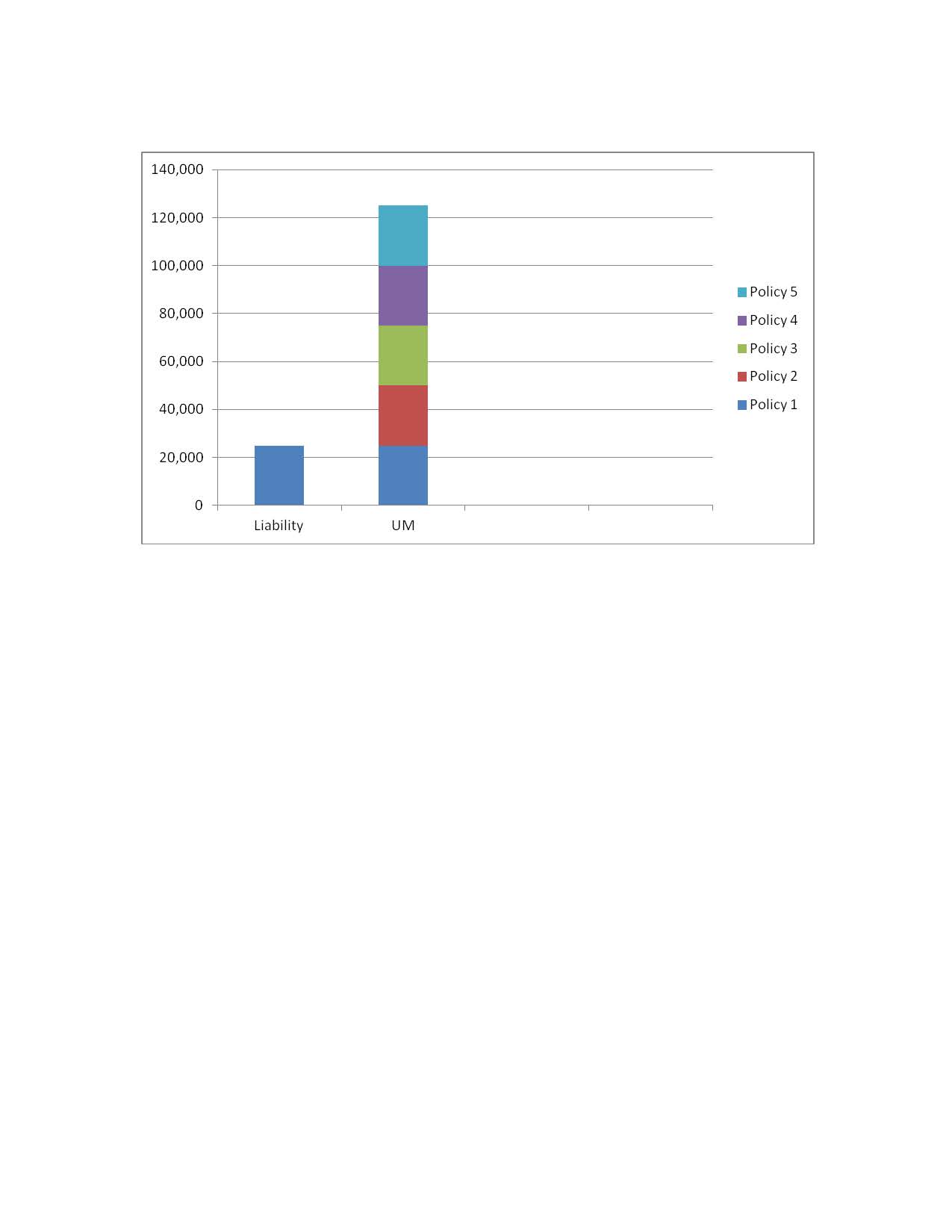 Who pays?  The liability carrier pays its $25,000 first (but only under a Limited Liability Release preferably drawn by your attorney – see my blog Two traps that can cause you to totally lose UM coverage you have paid for), and then applying decisions of Georgia’s appellate courts, 4 of the 5 UM policies will pay another $100,000 so you recover your full $125,000 in damages.

UM coverage is one of the most important coverages you can buy, and it’s often much less expensive than you might think.  If several traditional/offset UM policies cover you, stacking increases the chance you’ll be able to recover your losses.

What should I do if all this UM coverage confuses me?

UM coverage can be extremely complicated to understand and easy to lose if you are not careful.  I would highly recommend you have a free consultation with an attorney to make sure you get all the coverage to which you are entitled.  If you would like to set up a free consultation with me or one of the other attorneys in our firm who specializes in personal injury cases, simply call the phone number at the upper right or complete the “Need Help” form at the right of this page.

I’ve never been treated so well in my life! Ann-Margaret worked so hard for us. She really, really, cares. I recommend her highly.