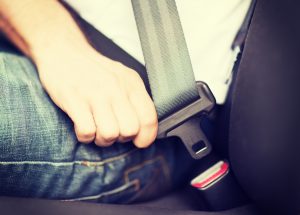 This is Ann Margaret Perkins with Perkins Law Firm and I’m going to talk today about seatbelts. As someone who’s practiced personal injury law for 25 years, I am a great believer in the importance of seatbelts.

The CDC has some statistics that probably are good to be reminded of. I think seatbelts are so common sometimes we forget how important they are. Most drivers and passengers killed in crashes are unrestrained. Of the people, drivers, and passengers killed in crashes in 2009, which is the year of statistics on their website, 53% of those were not restrained. The primary benefit of a seatbelt during a crash is it keeps you from being ejected. If you’re not wearing your seatbelt you are 30 times more likely to be ejected from your vehicle during a crash and more than three out of four people who are ejected, die from their injuries. There is something about seatbelts I want to touch on that’s not related to their safety and I’m not saying don’t wear your seatbelt for this reason but I think it’s important for people just to be aware of the fact that there are some specific injuries that I see related to seatbelt use. Now even though I see these, I wear mine every time I get in my car. But a couple of times a couple of them I’ve seen I think people need to be aware of are shoulder injuries and neck injuries.

I have handled dozens of cases where a person had on a lap and a shoulder restraint and in the crash, they ended up with a shoulder injury. You might say, well how on earth can that happen from having your seatbelt on? Well, the shoulder restraint is going to hold, hopefully, hold your body, your torso pretty effectively against the seat but your shoulder joints in your arms are not restrained. So sometimes what I see happen is that the person is holding the steering wheel and with the force of the crash, their bodies held against the seat but their shoulder, their arms and their shoulders move and they end up with a shoulder injury and I’ve had several that involve significant shoulder injuries like rotator cuff tears. If you’re a passenger, you’re obviously not holding the steering wheel. You might instinctively stick your arms out and your shoulders are what’s going to take the brunt of that impact. And we’d only think about it, shoulders are joints that basically our arm is attached to the end of our clavicle. That whole joint is just connected by a bunch of muscles. So we think about maybe our shoulder joint as being incredibly strong and it is but it’s also incredibly vulnerable in some respects. And one of those is a crash if you’ve got your shoulder harness on.

The other injury I see with seatbelts is neck injuries. And again that’s because the seatbelt holds in our torso to the seat. You don’t think about how heavy your head is. You know our heads are maybe 15 pounds. And if your body is being held against the seat and your 15-pound head is flying forward, that’s a tremendous amount of force on your neck, which is trying to keep your head connected to your body. And I see bad muscle, tendon, ligament injuries from people who have on a seatbelt and also occasionally you know more significant either vertebrae or disc injuries even where a person was wearing their seat belt. So if you’re in a crash and you’ve had your seatbelt on and you’re having, you know I think people are much more aware of neck issues cause we assume that these are easily caused in crashes, that sometimes we don’t think so much about shoulder injuries being related. If you’re in a crash and you had your seatbelt on and you’re shoulders are bothering you some, it probably would be a good idea to bring that to the mention of your doctor and let them look into that. Again I would never discourage anybody from using their seatbelt, but I do think you need to be aware of injuries that can arise from the use of those. I hope this was a helpful podcast. If you have questions about this topic or any others related to personal injury or wrongful death I’m certainly happy to talk to you. My number is 720- 834-2083. Or you can check out information on our website, injuryispersonal.com