Who is Responsible if You’re Hurt on Someone’s Premises 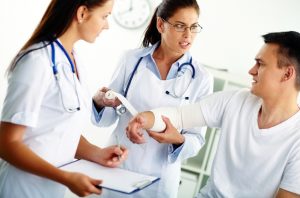 This is Ann Margaret Perkins with Perkins Law Firm and today I’m going to be talking about who is responsible if you’re hurt on someone’s premises. I handle a good bit of what we call premises liability litigation. And unlike a lot of attorneys who really don’t care much for premises liability work, I do enjoy doing it. It sounds interesting and it’s somewhat interesting because it’s complicated and I think you’ll see that during the course of this explanation today. So if you’ve got a premises liability case I would say at the onset please reach out to me or some attorney and at least talk to us about it to make sure that you don’t make any mistakes, some of which I’ll talk about in this. But generally speaking, premises cases involve a number of considerations.

One of the first things that lawyers look at is: what is your legal status on the property? And in Georgia, your legal status is generally one of three things: an invitee, a licensee or a trespasser. Most cases that I’m involved in are someone at someone’s business and they get hurt at that business. You know, a fall in the store or something falls off the shelf in a store. In those situations, the person injured is almost always what’s called an invitee. So in this podcast that’s really what I’m going to cover is if you’re an invitee on someone’s premises. If you are an invitee there are potentially three people who can be responsible. But the primary two are the owner and the occupier. The owner may also be the occupant. Now you may have somebody who owns the building and owns the business. But a lot of times you’ll have a building that’s leased to whoever the business is. If you have a landlord-tenant situation, then the owner who’s the landlord, may not be responsible. If the landlord is in Georgia and has fully parted with possession they are not responsible unless your injury happened as a result of a construction defect or the landlord’s failure to repair something. A landlord can further avoid responsibility if it’s a failure to repair situation if, in the lease between the landlord and tenant, the tenant agreed to relieve the landlord of repair obligations. And that is a very typical provision in a commercial situation. The tenant assumes all the responsibilities for repairs. So if the lease provides that the tenant is responsible for repairs, the landlord may be able to escape responsibility, but not if the landlord had no notice of the condition that needed to be repaired.

So you can kind of see just from this part of the podcast, that there are a lot of exceptions and twists and turns to premises cases. Now, the occupier, who is typically going to be the tenant if it’s not the owner, they have a duty under Georgia law and basically, their duty is to keep the premises safe. That does not mean that they if you get hurt on someone’s premises that they are automatically responsible. That’s not true. They have to keep the premises safe, but you also have a duty to exercise ordinary care. And so even if there is a condition on the premises that are unsafe if you fail to exercise ordinary care. For instance, if it’s something that’s just wide open and you walk into it and you are injured, or if it’s something that a person who is being ordinarily careful would have seen and avoided, then even if it’s unsafe you might not be able to recover. Generally speaking the law in Georgia does provide a very broad protection for people who are invitees. So if you’re injured due to some condition on the premises we might have to look at whether you also had some responsibility but that really is a separate inquiry.

Now I said potentially there are three people who can be responsible. I had a case several years ago involving an owner of a shopping center, the tenant of that particular part of the shopping center where my client was injured. Obviously, we had claims against both of those and we found out that there was an adjoining business to the shopping center who had gone out and there was a situation where ice had accumulated on a sidewalk because of a pipe burst during very cold weather. The business where the pipe had burst, had gone out and they had tempted to do some cleaning up of the ice but they did a very bad job of it and actually made it worse. So in that case, even though that business was not the owner of the property, they weren’t the occupier or the tenant of the particular business where the injury occurred, but because they had undertaken a duty to do something, to clean up this ice and they did that negligently, we were actually able to bring them into the case and had a claim against them as well.

Why would we need to include them? Premises cases often involve very bad injuries. When people fall from standing, when they trip, a lot of times they’ll put their arm out, they’ll have a bad injury to an arm or shoulder, they may hit their head, if they slip they may end up with a bad hip or back injury or neck injury or even a head injury. So these can frequently involve very bad injuries. And for that reason, it is critical to identify every potentially responsible party and that is especially true since the law in Georgia changed several years ago. For instance in the case where the business started trying to clean up the ice and do it negligently, if we had not sued that company as well, then the owner and occupier of the property that we sued is allowed under Georgia law to say there’s somebody else who’s responsible for this and they can point the finger at that other responsible party. And whatever recovery you might get against the owner and occupier, in that case, could be reduced by the percentage of fault that this other business that you didn’t sue, their percentage of responsibility. So understanding all the twists and turns in these cases is really critical because you can end up shooting yourself in the foot if you don’t know all the angles you need to approach these cases.

Again because the injuries are often so severe it’s really important that you know what you’re doing and the case is handled correctly. If you have a premises liability case I’m more than happy to talk with you about it. I think in those cases it’s really critical to reach out to an attorney early on so that you don’t make mistakes. If you want to talk our number is 770-834-2083 or you can find out more information about premises liability cases and the other cases we handle on our website injuryispersonal.com

My experience with Perkins Law Firm was better than I could have hoped for. They made me feel like my case mattered.