How Does The Law Define Bodily Injury 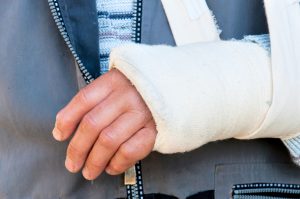 This is Ann Margaret Perkins with Perkins Law Firm and today I’m going to be talking about how the law defines the term, “bodily injury”.

The short answer is: “Probably broader than you might think.” We think of bodily injuries as being physical injuries to our bodies, and they certainly are. But the law also extends bodily injuries to mental and emotional injuries. The law does, however, require to recover for mental and emotional injuries, that a person have a bodily injury. In fact, it might help to hear how the judge explains this to the jury in a trial. And generally what they tell the jury is, “Pain and suffering includes mental suffering. But mental suffering is not a legal item of damage unless there is physical suffering also.”

What sort of physical injuries are considered bodily injuries? Everything from fractures to closed head injuries, whiplash, herniated disc, cuts and scars, even a bruise is a bodily injury. With regard to mental or emotional injuries, that includes things like stress, anxiety, worry, and depression. It can be something that is caused directly by the injury. For instance many times with closed head injuries, it’s a physical insult to the brain that causes the anxiety or the mental effect the person feels. With other mental injuries, they are primarily the result of having a physical injury that lessens your ability to do what you normally do. And maybe that leads to anxiety or depression.

An injury is a bodily injury whether it requires treatment or not, but, as I think most people can understand, without treatment generally you’re going to get a lower recovery something that doesn’t seem to require any treatment is not going to be seen as significant as something that does. That said, the amount of treatment something requires does not necessarily translate into what the recovery will be. And here’s one of the best examples I can give you. A broken bone may be treated by putting a cast on it and checking it once every couple of weeks for six weeks. But that broken bone, I think we would all agree, is a pretty significant bodily injury. A cut to the face might be treated by stitching it up and letting it heal. But a scar on the face, I think we could all agree, is a pretty significant result to live with. So, while generally speaking having treatment does matter to the value of what your bodily injury claim is, the extent of your treatment is not always going to dictate what your recovery is. Some conditions, even though they are serious, don’t lend themselves to a whole lot of treatment.

One other thing I want to mention is pre-existing injuries that are aggravated but not entirely caused by an event. I’ve done an entire podcast on this that you may want to listen to. You may have an underlying physical condition that didn’t bother you or bothered you but only some, that begins to bother you or bother you more after an event. In that case, it would be a bodily injury for which you could recover even though it’s a pre-existing condition.

Again I’ll tell you what the judge generally tells a jury in that circumstance. “If you find that at the time of the incident the plaintiff had any physical condition ailment or disease that was becoming apparent or was dormant, and if you should find that the plaintiff received an injury as a result of the negligence of the defendant, and that injury resulted in an aggravation of a condition already pending, then the plaintiff could recover damages for aggravation of the preexisting condition.”

Bodily injuries don’t have to be something that’s brand new. They can be an aggravation of a preexisting injury. If you are involved in some sort of event and are not sure whether or not you have a bodily injury sufficient to recover, feel free to give us a call and talk about it. Our number is 770-834-2083. Or you can find or contact information on our website injuryispersonal.com

I wanted to thank each and every one of you for making me feel comfortable as I was in the dark about everything.