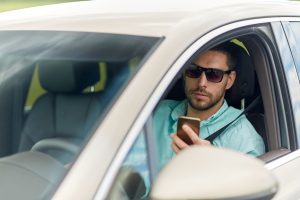 Hello, this is Ann Margaret Perkins with Perkins Law Firm. In this podcast, I’m going to be talking about cell phone laws while driving. I’m going to get to those in a minute. But first I want to get on a bit of a soapbox. Regardless of what the law is, I think we all know the things that we do when we drive that are potentially dangerous and using a cell phone is one of those. Using it to make a call is somewhat distracting and dangerous, but certainly using it as any sort of data device for texting or e-mail or Internet searches, is even more dangerous. So are things like eating, messing with the navigation that’s in your car, anything that takes either your eyes off the road or your mind off your driving can potentially lead to a wreck. And you probably have experienced this. If you’ve ever driven and used your phone or used your navigation in your car, or had your french fries sitting over in the passenger seat, you have probably looked up from whatever you were doing and been some somewhere on the road you did not mean to be and had a little bit of a gasp when you did that. You’d think we’d learn from those lessons but unfortunately, we don’t.

One thing I want to tell you about today that hopefully will help is to have you think about the distance you travel in a vehicle in a short period of time. For every mile an hour your car is moving you’re traveling 1.466 feet per second. So at 20 miles an hour that’s 30 feet per second. At 55 mph, that’s 80 feet per second At 70 miles per hour, you’re going over 100 feet per second. So at 55 miles per hour, in four seconds you cover the distance of a football field. Actually, you cover a little more than the distance of a football field. And I did a little experiment today before this podcast. I timed myself just getting ready to send a text, I didn’t actually type anything in the message. I just opened up my text messages and selected someone and then looked to see how long it took me to do that. And it took about eight seconds. In that period of time, I would have covered two football fields if I was driving 55 miles per hour. A tremendous amount of harm can be done in that distance if our eyes are not on the road and our brain is not engaged in our driving. I would encourage you to look at an organization called enddd.org. It’s a foundation that was established by an attorney whose daughter was killed by someone who was texting and driving. And they have some wonderful videos on there. They have speakers who will come out and speak to your organization, and that includes Georgia. Even though I think he’s from somewhere in the Midwest but they’re nationwide. So I would encourage you to take advantage of that.

All right so what are the laws on cell phone use in Georgia? What can you do? Well, those can vary from state to county to municipalities. The state has certain laws, a county can have different laws, and a municipality can have different laws. Now if a state law says you can’t do something, a county and municipality can’t say you can, but they can have additional restrictions on what you can do. So I’m just going to be talking about what the state law is about this. If you are over 18 years old, you can operate your vehicle and use your mobile device as a phone. That’s not against the law. If you are over 18 there are significant restrictions on the use of your phone or any other wireless telecommunications device. There are some things that are excluded from that definition like CB radios and other things. But we’re talking about cell phones. You cannot use your cell phone for anything other than its phone capabilities when you’re driving.

There are some exceptions to that. One is to report a traffic accident, a medical emergency, fire, other emergency situations like that. But otherwise, it is prohibited for you to operate your vehicle and use a wireless telecommunications device. If you are under 18 years of age you are prohibited completely from using your cellular phone. If you’re under 18 you are, in addition to using your phone as a wireless telecommunications device like texting or internet or e-mailing or anything like that, you are prohibited from using your phone as a phone. Now there are a few exceptions to that rule. And again those are things like reporting a traffic accident, medical emergency, serious emergency situations. The other exception is if you are lawfully parked. So if you’re under 18 the restrictions are much more significant. If you’re over 18, you can use it as a phone. That’s it.

But we all really need to remember driving is driving and that’s where our focus needs to be. If you’re going to use your phone really it’s best to stop, take a minute, do whatever you need to do on your phone and then get back on the road. If you are the victim of someone who has been texting and driving, I’m certainly happy to talk to you. I see a lot more cases that involve that these days. I see a lot more people get rear-ended at high speeds, which I really think is because people are distracted by their phones. But I’m happy to talk to you. Call us at 770-834-2083 or Check out our website, injuryispersonal.com.

I’ve never been treated so well in my life! Ann-Margaret worked so hard for us. She really, really, cares. I recommend her highly.